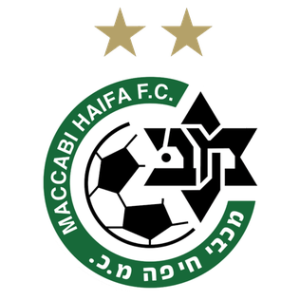 Maccabi Haifa Football Club (Hebrew: מועדון הכדורגל מכבי חיפה, Moadon HaKaduregel Maccabi Haifa) is an Israeli professional football club, based in the city of Haifa, a section of Maccabi Haifa sports club. The club plays in the Israeli Premier League. Maccabi Haifa home games are played at Sammy Ofer Stadium. The stadium, which is shared with rivals Hapoel Haifa, is the second largest in Israeli football, with a capacity of 30,780.[2]

Maccabi Haifa is one of the "Big Four" clubs in Israeli football. The meaning of the name Maccabi – 'there is no one like you among the gods' – also refers to the Star of David in the team's logo. The side has won fourteen league titles, six State Cups and five Toto Cups. Maccabi Haifa has won the championship and the cup in the same season (referred to as winning the "double") once, and was the first Israeli club to qualify for the group stage of the UEFA Champions League, in the 2002–03 UEFA Champions League season. Maccabi Haifa holds the record, for the most Champions League group stage qualifications for an Israeli team in three occasions. In 2020–21, Maccabi Haifa won the Premier League, their first championship in a decade.

Maccabi Haifa is currently coached by Barak Bakhar, who joined the team after several successful seasons with Hapoel Be'er Sheva and has gone on to guide the club to back-to-back league titles along with qualification for the Champions League group stages in 2022.