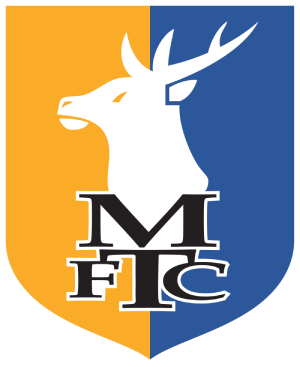 Mansfield Town Football Club is a professional football club based in the town of Mansfield, (East midlands), England. The team competes in EFL League Two, the fourth tier of the English football league system. Nicknamed 'The Stags', they play in a blue and yellow kit. Since 1919, Mansfield have played at Field Mill, which is now an all-seater stadium with a capacity of 9,186. Their main rivals are Chesterfield and Notts County.

The club was formed in 1897 as Mansfield Wesleyans and entered the Mansfield & District Amateur League in 1902, before changing its name to Mansfield Wesley and joining the Notts & District League in 1906. They then finally became Mansfield Town in 1910, and moved from the Notts & Derbyshire League to the Central Alliance the following year. Crowned Alliance champions in 1919–20, they joined the Midland League in 1921 and would win this league on three occasions – 1923–24, 1924–25 and 1928–29 – before they were admitted into the Football League in 1931. They were relegated out of the Third Division in 1960, but won promotion out of the Fourth Division in 1962–63, remaining in the third tier for nine seasons until their relegation in 1972. They reached the Second Division for the first time after winning the Fourth Division title in 1974–75 and the Third Division title in 1976–77, only to suffer two relegations in three seasons.

Promoted out of the Fourth Division under the stewardship of Ian Greaves in 1985–86, they went on to win the Football League Trophy in 1986–87. Mansfield were however relegated in 1991 and promoted again in 1991–92, only to suffer an immediate relegation the following season. They won promotion once again in 2001–02, but were relegated to League Two in 2003 and lost their Football League status with a further relegation in 2008. They spent five seasons in the Conference until they were promoted back into the Football League after winning the Conference in 2012–13 following investment from new club owner John Radford.