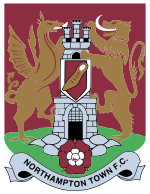 Northampton Town Football Club is a professional association football club based in the town of Northampton, England. The team plays in EFL League Two, the fourth tier of the English football league system.

Founded in 1897, the club competed in the Midland League for two seasons, before joining the Southern League in 1901. They were crowned Southern League champions in 1908–09, allowing them to contest the 1909 FA Charity Shield. Admitted into the Football League in 1920, they spent the next 38 years in the Third Division South. Under Dave Bowen, the club achieved three promotions from the Fourth Division to the First Division within five years. However, Northampton only survived for one season in the top tier of English football after relegation in 1966. Northampton then experienced two further relegations in three years to return to the Fourth Division by 1969 - this set a record in English football of moving from the fourth tier to the first tier and back in only nine years. After six seasons of stability in the fourth tier, the club won promotion before returning to the Fourth Division after another relegation in 1977. Northampton won further promotions to the third tier in 1987 and 1997. Relegated in 1999, they won immediate promotion after securing an automatic promotion place the following season. However they were once more relegated after three seasons of struggle in the third tier, before securing promotion out of League Two in 2005–06 after two unsuccessful play-off campaigns. Relegated at the end of their third season in League One, they won the League Two title in 2015–16, but only lasted two seasons in League One before again being relegated. In 2020, they gained promotion to League One, but were relegated to League Two once again after a single season in the third tier.

Northampton are nicknamed the Cobblers, a reference to the town's historical shoe-making industry, and the team traditionally plays in claret and white kits. The Cobblers played at the County Ground from 1897 until 1994, when they moved to the Sixfields in 1994 which has a capacity of 7,798. Northampton's predominant rivals have been Peterborough United, however, they also share smaller rivalry with Milton Keynes Dons. The club's record appearance holder is Tommy Fowler with 552 appearances between 1946 and 1961, while their leading goalscorer is Jack English with 143 goals.