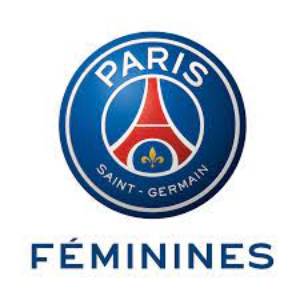 Paris Saint-Germain Féminine (French pronunciation: ​[paʁi sɛ̃ ʒɛʁmɛ̃]), commonly referred to as Paris Saint-Germain, Paris SG, or simply Paris or PSG, are a French professional football club based in Paris. Founded in 1971, they compete in Division 1 Féminine, the top division of French football. Their home ground is the Stade Jean-Bouin. They are the women's department of Paris Saint-Germain.

PSG have played in the top flight since 2001, when they won the Division 2 title. The Parisians won their first major honour, the Coupe de France, in 2010. This trophy, coupled with the club's takeover, signalled the start of a new era. PSG went from being a mid-table side to becoming one of the best teams in European football. The Red and Blues have since been crowned Division 1 champions for the first time in 2021, won a second cup title in 2018 and reached the UEFA Women's Champions League final twice.

The club's home kit colours are red, blue and white. PSG's crest features the Eiffel Tower and a fleur de lys. PSG have an intense rivalry with Olympique Lyonnais. The duo contest French football's most notorious match, known as Le Classique. They also have a strong rivalry with Paris FC, a fixture referred to as the Parisian Derby.

Tamim bin Hamad Al Thani, ruler of Qatar, owns parent club Paris Saint-Germain through state-owned shareholding organization Qatar Sports Investments (QSI), which purchased the club in 2011. The takeover made PSG the richest club in France and one of the wealthiest in the world. QSI took control of the women's team in 2012.