Buy football tickets to watch Chelsea in the Premier League and all Cup competitions with great deals available on all Chelsea tickets this season at Football Ticket Pad. Chelsea are one of the most popular tickets on our site with tickets for all of their matches, including cup competitions and away matches.

Chelsea are one of the richest clubs in the Premier League and have invested money in purchasing some of the best footballers in the world. The most exclusive tickets to title-deciding games will be available right here at Football Ticket Pad.

Stamford Bridge, the home of Chelsea Football Club is situated in the heart of affluent South West London so is perfect if you want to catch a game in the capital. The ground has a capacity of over 40,000 and there is an unmistakable atmosphere generated at the bridge because the stands are so close to the pitch.

Football fans nationwide have the opportunity to see great games at Stamford Bridge week in, week out by buying tickets straight from Football Ticket Pad. Chelsea tickets can be purchased from our site with complete confidence thanks to our unique football ticket guarantee.

A selection of Chelsea tickets for away games is also available and Chelsea football fans should make Football Ticket Pad their one-stop shop for genuine Chelsea FC tickets. Our range of Hospitality CFC tickets and executive Chelsea tickets sell almost instantaneously so be sure to keep an eye out for these when they appear!

Stamford Bridge is the home of Chelsea Football Club and is situated in the heart of affluent South West London, making it a perfect location if you wish to catch Chelsea FC tickets for a match in the capital.

The ground has a capacity of over 40,000 and there is an unmistakable atmosphere generated at the bridge because of the fact that the stands at the ground are in very close proximity to the pitch. In many ways, Stamford Bridge is reminiscent of the way football used to be and offers a chance to see the world’s best footballers in a reasonably intimate venue with Chelsea tickets from Football Ticket Pad.

Their stadium is one of the oldest football grounds in England and has been their home ever since the club was founded in 1905, making Chelsea FC tickets a real treat for any Blues fan visiting London.

Matthew Harding Stand / North Stand: This is a two-tiered stand located behind the goal in the North End of the Stamford Bridge. This is where the majority of Chelsea season ticket holders are seated and where Chelsea season/members cards are hosted.

The Matthew Harding Stand was named after the former club director whose investment transformed the club in the early 1900s. This is one of the most lively areas in the stadium to sit, especially in the lower tier.

Fans can buy both Shortside Upper and Shortside Lower tickets for this section of the ground. The club museum and Chelsea Health Club and Spa can be found adjacent to the stand.

East Stand: This is the Main Stand at Stamford Bridge and is made up of three tiers. The players’ tunnel, dugout and Press Box are all housed in this part of the stadium with the middle tier providing Executive Boxes and Club Suites for Chelsea ticket holders. A family section can also be found in the lower tier of the East Stand.

When the stand was built in 1905 it was the only stand that was built with a roof. The East Stand was then demolished and rebuilt in 1973 where it now holds around 11,000 Chelsea supporters.

Shed End / South Stand: This is the smallest stand in the stadium holding a little over 6,000 fans. Despite its size, it is one of the loudest parts of the stadium and houses around 3,000 fans in the away section in the corner towards the East Stand. Shortside Upper tickets are widely regarded as some of the best seats in Stamford Bridge in terms of both noise and view.

West Stand: This is the largest and most recent stand at Stamford Bridge after it was fully refurbished in 2001 to hold over 13,000 fans over three tiers. The middle tier of the West Stand is designated entirely to Executive Boxes, known as the Millennium Suites - all of which are named after former Chelsea players. There are six suites in this stand which also include the Clarke Suite, Drakes and Tambling Suite.

On matchday, ticket holders can visit the Peter Osgood statue outside the East Stand in memory of the former striker who was known as ‘The King of Stamford Bridge. 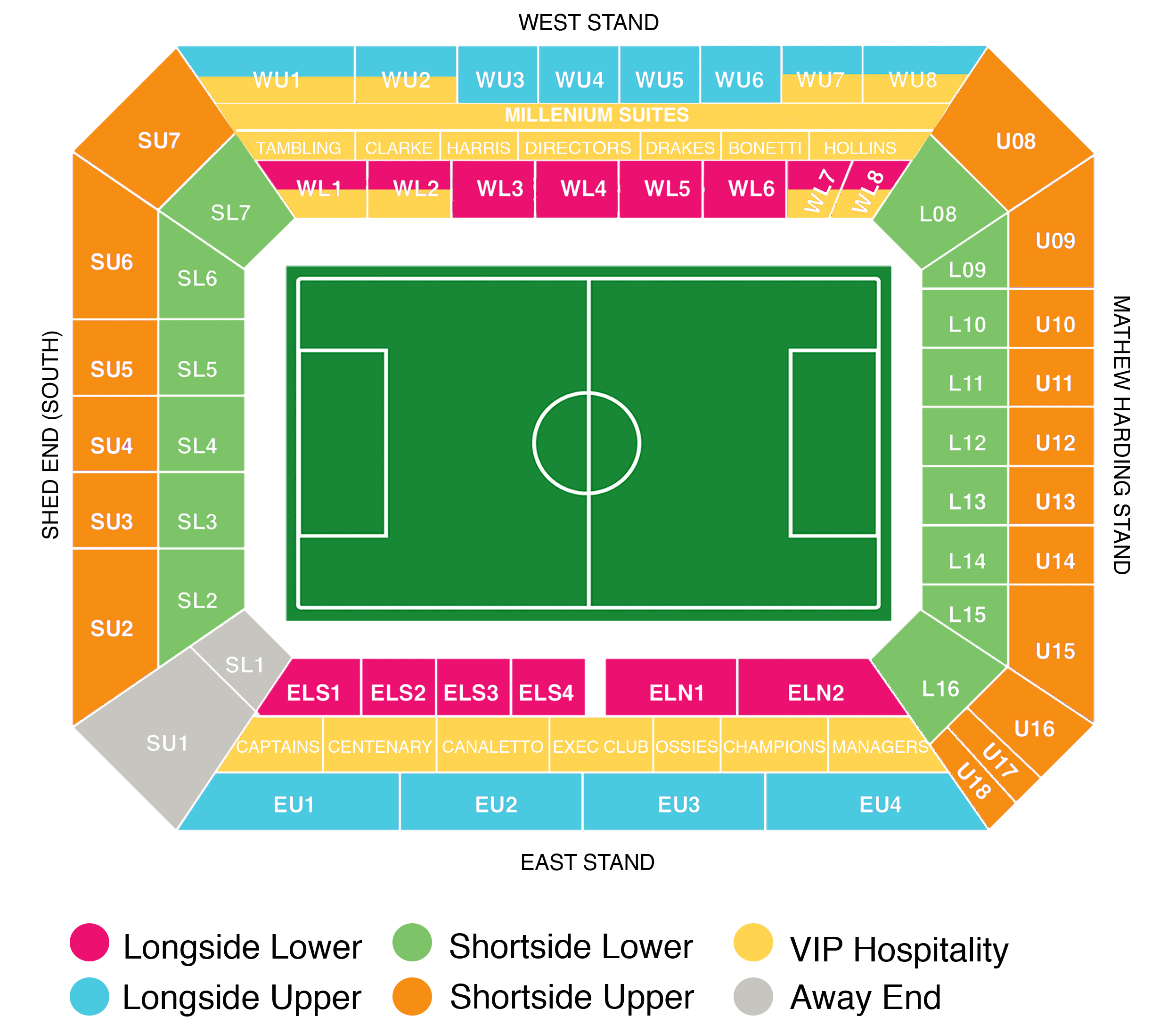 Season / Members Cards: These Chelsea tickets are reserved seats which are available at Stamford Bridge for every match of the season. Football Ticket Pad customers will then receive their Chelsea ticket prior to the match, before returning their season/members card back in a pre-paid envelope after the game.

Chelsea Season / Members cards are available in various parts of the stadium and fans can see the available ticket types when browsing their intended Chelsea ticket page. Once customers get their ticket they then scan their season/members card at the turnstile when gaining entry to the stadium.

E-tickets: Chelsea tickets always come in the form of either paper tickets or season cards unfortunately there are no eticket options available at Stamford Bridge.

Paper tickets: This is the more traditional way to receive your official Chelsea FC matchday tickets. Once your payment has been confirmed on Football Ticket Pad your tickets are then sent out by post to the address provided in your payment details. Customers then receive their CFC tickets 3-4 days prior to the match and they will be notified by email once their tickets have been dispatched. Chelsea ticket holders can then gain entry to Stamford Bridge with their paper ticket at the turnstile.