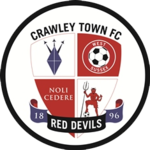 Founded in 1896, Crawley helped to found the West Sussex League later that year before transferring to the Mid-Sussex League. The club disbanded in 1935, but were re-established in the Brighton, Hove & District League three years later. The club switched to the Sussex County League in 1951 and then moved on to the Metropolitan League five years later. The club moved from amateur to semi-professional status in 1962 and were accepted into the Southern League the following year. They secured promotion out of Division One in 1968–69, only to suffer relegation the next season.

Crawley were promoted out of the Southern League Southern Section 1983–84 and spent the next 21 seasons in the Premier Division, before winning promotion into the Conference as champions of the Southern League in 2003–04. The club turned fully professional in 2005 but faced immediate financial difficulties and entered administration the following year. The club survived and appointed Steve Evans as a manager in May 2007. Evans led them into the Football League as champions of the Conference in 2010–11 and then secured promotion in their first season in League Two. Crawley spent three seasons in League One before their relegation in 2015.