Crystal Palace tickets are available as part of our extensive selection of Premier League tickets here at Football Ticket Pad; whether you are a seasoned Eagles fan, or just in London and are looking to catch a game, why not get yourself over to Selhurst Park with some CPFC tickets and you’re sure to be entertained.

Palace have established themselves as a competitive top-flight side in recent seasons and they are becoming a popular team to follow in London with their expansive style of play and unique atmosphere.

Football Ticket Pad has a variety of seats available for each match at Selhurst Park, including CPFC hospitality tickets and Palace VIP tickets for their matches in the Premier League, FA Cup and EFL Cup for the duration of the season.

The Eagles are one of the trickiest opponents for many Premier League clubs and their popularity with Football Ticket Pad customers continues to grow year on year.

The club maintains a strong rivalry with Brighton & Hove Albion and tickets for this M23 Derby match are always available to buy online for low prices at Football Ticket Pad. We have so many options available for our customers with tickets available for all of Crystal Palace's biggest games both home and away.

Selhurst Park is one of the most atmospheric grounds in the Premier League. The seats at the stadium are within close proximity to the pitch putting you as close to Premier League players as you are ever likely to get!

Due to their low capacity, Crystal Palace football tickets are often short in supply. Be sure to order swiftly to guarantee your seats at this popular and unique footballing venue.

If you're a first-timer you may not know what you've got yourself into having purchased Crystal Palace tickets. This small south London stadium only holds just over 25,000 supporters but generates a sound twice as loud as its London counterparts. It's really something else. Booking Crystal Palace football tickets will throw you into an atmosphere of noise amongst raucous, diehard Eagles fans.

Selhurst Park is one of the oldest stadiums in the Premier League and had been The Eagles home since 1924. The Palace supporters create a real lively atmosphere and make a trip to South Norwood all the more appealing for Football Ticket Pad customers.

Holmesdale Road Stand: In 1994, the Holmesdale terrace got demolished and replaced by a two-tiered all-seater stand which houses the most passionate Palace support behind the goal. It is the largest stand in the stadium holding over eight thousand fans. If Football Ticket Pad customers are after an atmosphere then this is the place to sit with Shortside Upper and Shortside Lower tickets.

Main Stand: The Main Stand has had numerous renovations over the years since it was opened in 1924. In the 1990s a new roof was installed and a new entrance built. It is here where the players and staff emerge from on matchday and hosts many of the club’s VIP Suites, including the Directors Box, Glaziers Lounge, Stephenson Suite, Wright & Bright Lounge and the Family Lounge.

Customers can access a limited number of Crystal Palace VIP tickets through our fixture pages or they can choose Longside Lower tickets if they would prefer to be closer to the action. Ticket holders can also visit the Fan Zone area designated behind the Main Stand with a live DJ before kick-off and plenty of pre-match entertainment from club mascots and club cheerleaders, The Crystals.

Whitehorse Lane Stand: Located North of Selhurst Park, the Whitehorse Lane Stand consists of a single tier of seating with 42 newly refurbished executive boxes spanning over two tiers. It is a unique stand situated behind the goal and is known as the club Family Stand seating a large number of Palace season ticket holders and club members on matchday.

This is another vibrant part of the stadium and Football Ticket Pad customers can be sat here for some of the biggest matches of the season with Shortside Lower tickets.

Arthur Watt Stand: Named after one of the club’s former Chairmen, the Arthur Watt stand is one of the oldest stands in the stadium and sits opposite the Main Stand running adjacent to the touchline.

The Arthur Watt Stand also houses 2,600 away supporters who are placed in the corner of the stand. If customers are wishing to be in this historic part of the stadium they can do so by purchasing Longside lower tickets or away section tickets. 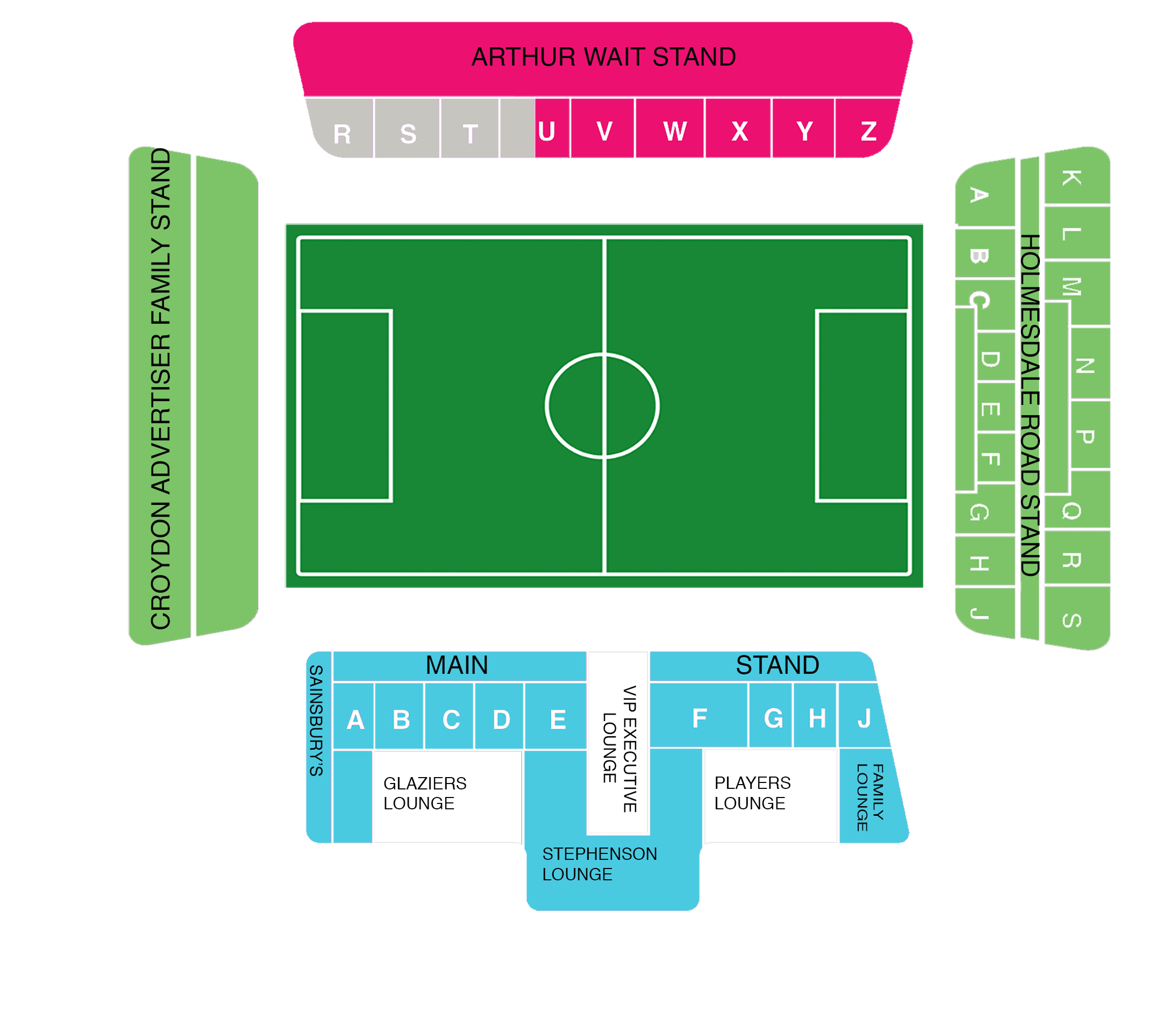 E-tickets: CPFC do carry an e-ticket option but this is only accessible for Football Ticket Pad customers purchasing Crystal Palace hospitality tickets. E-tickets are confirmed in an email once a payment has been made. Palace ticket holders then scan the email barcode upon entry at Selhurst Park. There are plenty of Crystal Palace hospitality options at SE19, including the Stephenson Lounge in the Main Stand or Private Boxes in the Whitehorse Lane Stand.

Paper tickets: Once your ticket payment has been confirmed on Football Ticket Pad your tickets are then sent out by post to the address provided in your transaction details. Customers then receive their CPFC tickets 3-4 days prior to the match and will be notified by email once their tickets have been dispatched. Ticket holders can then enter the stadium by scanning their paper ticket at the displayed turnstile on their match ticket.