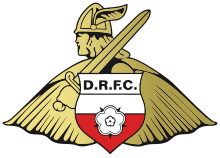 Doncaster Rovers Football Club is a professional association football club based in the town of Doncaster, South Yorkshire, England. The team compete in League Two, the fourth tier of the English football league system. The club play their home games at the Keepmoat Stadium, having moved from Belle Vue in 2007.

Their home strip consists of red and white hoops, which has been the main design of the club's home shirt since 2001 through different variations.

The club was founded in 1879 and turned professional six years later, moving to the Intake Ground. They entered the Midland League in 1891 and were elected into the Football League in 1901. The club lost re-election votes in 1903 and 1905 and so returned to the Midland League. They were admitted into the Football League for a third and final time in 1923 and went on to win the Third Division North in 1934–35. The club won two further Third Division North titles in 1946–47 and 1949–50, having been relegated from the Second Division in 1937 and 1948. Doncaster found themselves in the Fourth Division after suffering successive relegations in 1958 and 1959, though would win the Fourth Division title in 1965–66 and 1968–69. The club continued to move between the third and fourth tiers, winning promotions in 1980–81 and 1983–84 and relegations in 1983 and 1988, before suffering relegation into non-League football in 1998.

Doncaster regained their Football League status after winning the 2003 Conference play-offs and then went on to win the Third Division title in 2003–04. They won the Football League Trophy in 2007 and the next year won the League One play-offs to secure a place in the second tier for the first time. They spent four of the next five seasons in the Championship, winning the League One title in 2012–13, though were relegated out of the Championship in 2012 and 2014. Relegated into League Two in 2016, they won an immediate promotion in 2016–17 and remained in League One until their relegation in 2022.