Witness the electricity of Goodison Park as Everton strive to bounce back from their worrisome season just gone. With Frank Lampard’s side, they will be eager to progress as far as possible in all competitions. His experience at the highest level in his playing days hopes to carry over to the Merseyside blues. Witness the atmosphere yourself as you buy Everton tickets for the 2022/23 season with Football Ticket Pad today.

Everton is one of the most beloved clubs in all of English football. With some of the most passionate football fans around, there is little comparison in watching the toffees play for their fans. Whether it be for Premier League matches, FA Cup fixtures or Carabao Cup games - we host an extensive range of Everton tickets to purchase with Football Ticket Pad.

How will Everton FC fare this season? Only time will tell, although one thing is for certain - both fans and players will give everything they have for their beloved club. All Everton matches are anticipated to be a spectacle, as the sides' dedication to their fans looks to generate entertainment like no other - creating priceless memories. Be a part of something truly special as you buy Everton tickets for the 2022/23 season with Football Ticket Pad today.

Goodison Park has been home to Everton Football Club since 1892 and is one of the oldest football stadiums in the world. The ground holds around 40,000 supporters and Everton fans are one of the most passionate and loyal supporters in English football. Everton tickets give customers the chance to visit a historic stadium full of tradition and a chance to watch one of England’s longest-serving clubs in action.

Football Ticket Pad has a variety of Everton tickets at Goodison Park for matches in the Premier League, FA Cup and EFL Cup for the season. Away fans can also secure their tickets with a selection of Everton FC VIP and hospitality tickets also listed for some of the Blues biggest matches.

Secure your EFC tickets and watch the Blues emerge onto the field with their Z-Cars anthem ringing around the stadium in a sea of blue and white. Everton supporters will be pleased to hear that the new stadium, Bramley-Moore Dock Stadium, is expected to be open for Evertonians in 2024, and will hold almost 53,000 fans.

Goodison Road Stand: This is the largest stand at Goodison housing over 12,000 fans. The Goodison Road Stand is constructed with two lower tiers and an expansive upper tier that holds both press and hospitality facilities in the middle section. A family enclosure is also in the lower tier and this is where numerous members' tickets are located with Longside Lower and Longside Upper tickets. Numerous hospitality suites are hosted in the Goodison Road Stand, including The Brian Labone Lounge, The 85 Lounge and Joe Mercer Suite.

Bullens Road Stand: Similar to the Goodison Road Stand, The East side of the stadium has two lower tiers including a paddock section with an upper-tier above which is built with distinctive truss features which can be found around the stadium. Away fans are also seated in the Bullens Road Stand towards the Sir Philip Carter Park Stand. Fans can sit here with Longside Upper and Longside Lower tickets and they are packed tight to the pitch which helps generate the famous Goodison Park atmosphere.

Howard Kendall Gwladys Street End: This is where the most vocal Everton supporters are seated and is largely Everton season ticket holders who sit in this section. The two-tiered stand is the most famous at Goodison and is often the end that The Blues choose to attack towards in the second half of matches. The stand was recently renamed in July 2016 to include the name of Howard Kendall in honour of the clubs most successful manager who died in 2015.

The stand was also renamed to include the name of Sir Philip Carter in honour of Everton’s most successful chairman. Carter oversaw the Blues 1984 FA Cup triumph and two league titles in 1985 and 1987. Fans wishing to sit in this section of the stadium can do so with Shortside Lower and Shortside Upper tickets. 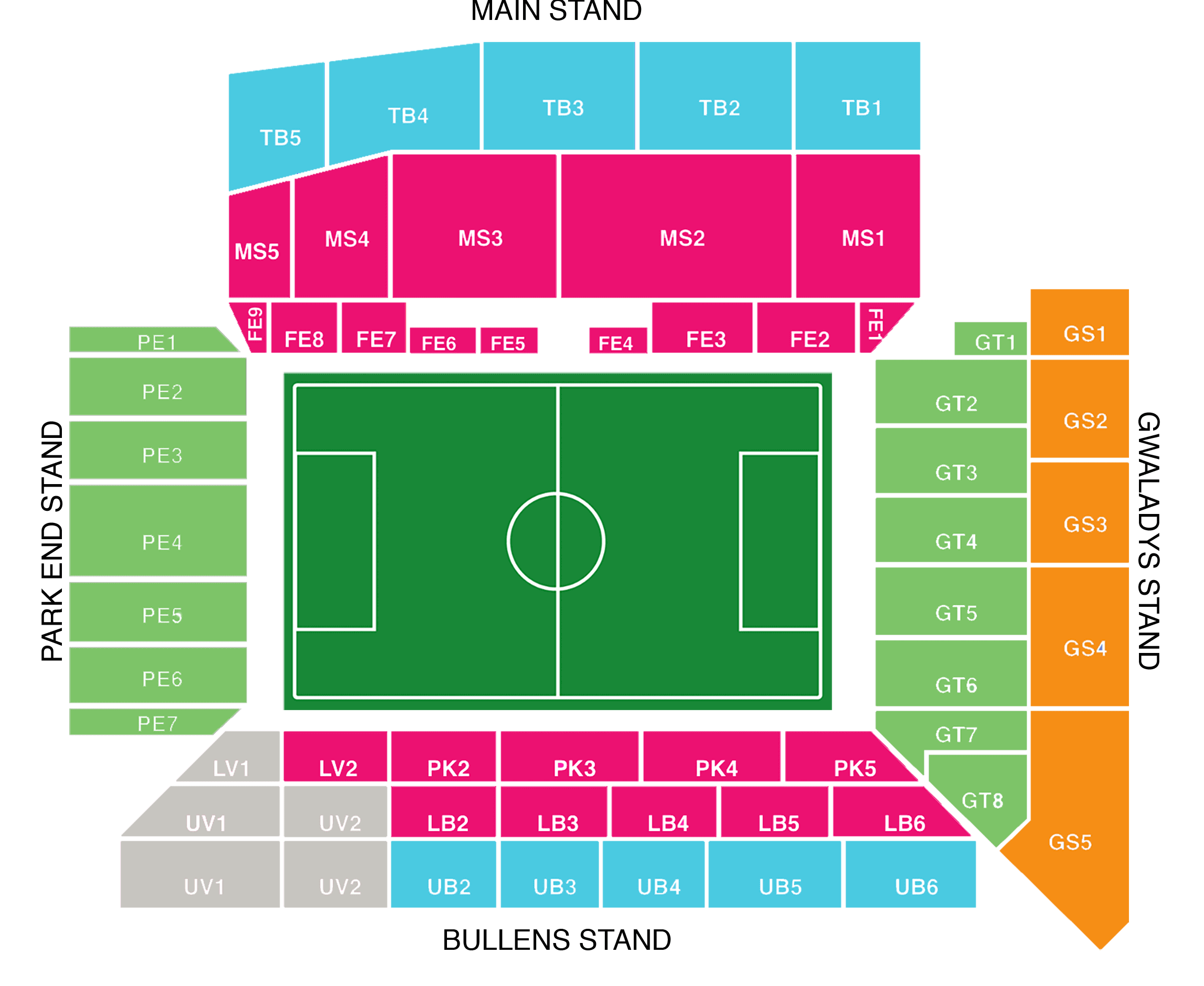 Season / Members card: Reserved seats which belong to EFC official members which are available at Goodison Park for every home match in the season. Football Ticket Pad customers will then receive their Everton tickets in plenty of time before kick-off, then returning their season/members card back in a pre-paid envelope after the game.

EFC Season / Members cards are available in various parts of the stadium, particularly in the Howard Kendall Gwladys Street End and Goodison Road Stand. Customers can view the available ticket types when browsing their intended fixture page. Once customers get their ticket they then scan their season/members card at the listed turnstile to gain entry to the ground.

E-tickets: Everton tickets also carry an e-ticket option but this is only applicable for Football Ticket Pad customers purchasing Everton hospitality tickets. E-tickets are confirmed in an email once the payment has been processed. EFC ticket holders can then scan the email barcode on entry to the stadium. There are plenty of hospitality options at Goodison, with the most popular suites being in the Goodison Road Stand.

Paper tickets: This is the more traditional way to receive your official EFC matchday tickets. Once your payment has been confirmed on Football Ticket Pad your tickets are then sent out by post to the address provided in your payment details. Customers then receive their Everton FC tickets 3-4 days prior to the match and will be notified by email once their tickets have been dispatched. Everton ticket holders can then enter the stadium with their paper ticket at the displayed turnstile.