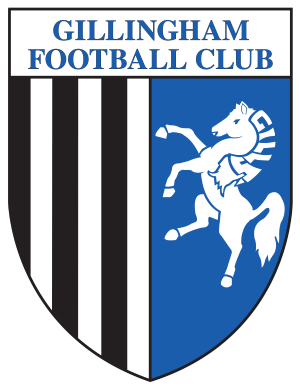 Gillingham Football Club is a professional association football club based in the town of Gillingham, Kent, England. The only Kent-based club in the Football League, the "Gills" play their home matches at Priestfield Stadium. The team will compete in League Two, the fourth tier of the English football league system in the 2022–23 season. Paul Scally has been the club's owner and chairman since 1995.

The club was founded in 1893 as New Brompton Football Club, a name retained until 1912, and played in the Southern League before joining the Football League in 1920. After 18 unsuccessful seasons, Gillingham were voted out of the league in favour of Ipswich Town at the end of the 1937–38 season, and returned to the Southern League. The club was voted back into the Football League in 1950, when it was expanded from 88 to 92 clubs. Twice in the late 1980s Gillingham came close to winning promotion to the second tier of English football, but a decline then set in and in 1993 they narrowly avoided relegation to the Football Conference. Between 2000 and 2005, Gillingham were in the second tier of the English football league system for the only time in their history, achieving a club record highest league finish of eleventh place in 2002–03.

The club originally played in black and white striped shirts but switched to blue shirts in the 1930s. The club crest has traditionally depicted the white horse symbol of the county of Kent. Priestfield Stadium has been the club's home ground throughout its existence; it once held up to 30,000 fans but in the modern era the capacity is less than half that figure. The club has twice won the championship of English football's fourth tier, in the 1963–64 and 2012–13 seasons, under managers Freddie Cox and Martin Allen respectively.