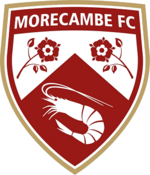 Morecambe Football Club is a professional football club in Morecambe, Lancashire, England. The team competes in League One, the third tier of the English football league system. Nicknamed the "Shrimps" due to the coastal town's local speciality food, the club have played home games at the Mazuma Stadium since moving from their original home at Christie Park in 2010. The club contests rivalries with nearby Accrington Stanley and formerly with non-league neighbours Lancaster City, along with other Lancashire clubs.

The club was founded in 1920 and entered into the Lancashire Combination, where they would remain for the next 48 years, winning the league title on five occasions: 1924–25, 1961–62, 1962–63, 1966–67 and 1967–68. They joined the newly formed Northern Premier League in 1968 and went on to win the FA Trophy in 1974 and the Northern Premier League President's Cup in 1992. Under the stewardship of Jim Harvey, a second-place finish in the 1994–95 Northern Premier League Premier Division season saw them promoted into the Conference. Having been beaten in the 2003 and 2006 play-off semi-finals, Sammy McIlroy led the club to promotion into the Football League with victory in the 2007 play-off final. They finished in the top ten of League Two twice, reaching the play-off semi-finals after fourth-place finishes in 2009–10 and 2020–21; the latter season saw them book a place in the League Two play-off final and their first-ever promotion to League One.