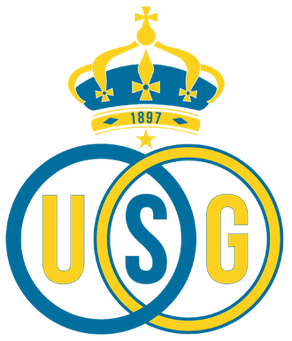 Royale Union Saint-Gilloise, abbreviated to Union SG or USG, unofficially simply called Union, is a Belgian football club originally located in the municipality of Saint-Gilles, in Brussels, although since the 1920s it has been based at the Joseph Marien Stadium in the neighbouring municipality of Forest.

The club is one of the most successful in the history of Belgian football. The club won eleven Belgian championships between 1904 and 1935, making it the most successful Belgian club before World War II. The team colours are blue and yellow and its matricule is 10. The team is traditionally popular with working class communities of southern Brussels, as well as more recently with more affluent supporters and workers of the European institutions, as well as both the French and the Flemish speaking free universities.

On 13 March 2021, after defeating local rivals R.W.D. Molenbeek, Union was promoted back to the Belgian First Division A, marking its first appearance in top-flight football in 48 years. The following year, they finished top of the table at the end of the regular season, the first club in Belgian history to do so the season after promotion to the top flight. Union would go on to finish second in the champions play off, securing Champions League qualification for the first time ever in club history.