If you are a West Ham fan you can use Football Ticket Pad to capitalise on our plentiful collection of West Ham football tickets and the great many offers that we have. This is your chance to take advantage of some unbeatable prices and pick from a choice of West Ham United tickets to the biggest and best games the Hammers take part in this season with Premier League tickets, FA Cup tickets and Carabao Cup tickets.

For any football fan searching for Premier League tickets, West Ham tickets offer a brilliant opportunity to watch the Hammers test themselves against the best in the country. West Ham customers can buy tickets for all of the top games at the London Stadium this season, including derby matches against the likes of Arsenal, Chelsea, Tottenham and much more!

The three-time FA Cup winners are looking to repeat the glory years of the 1960s and West Ham tickets are growing in popularity as they climb the table in the Premier League hosting their home matches at the London Olympic Stadium.

Football Ticket Pad have tickets for all West Ham matches this season with away section tickets also available for travelling away supporters who will be sat with the away fans.

Tickets can be extremely limited and prices can vary depending on the demand and availability. Buy your West Ham tickets today to avoid missing out! All of our available match tickets can be found below for both home and away matches this season.

Premier League tickets are always in high demand but the chance to buy West Ham tickets presents the opportunity to find a good deal when it comes to watching Premier League football in London.

The Hammers are building a competitive team that is capable of upsetting some of the top teams in the division and with some world-class individuals among their squad, it can be difficult to turn down the chance to buy West Ham tickets!

West Ham endured a tumultuous few seasons and have been through their fair share of managers over the years. However this spell seems to have ended as in the 2020/21 season, they narrowly missed out on Champions League football but managed to qualify for the Europa League.

Take a look at some of our great deals available to buy now at Football Ticket Pad with West Ham tickets for both home and away matches still on sale!

Built for the 2012 Olympic Games, The London Stadium is the latest Premier League ground for football enthusiasts to visit and it is certainly one not to miss! The ultra-modern Olympic Stadium is the new home of The Hammers and 60,000 supporters can now enjoy watching live football at one of the most impressive arenas in the country.

The Hammers boast a proud history and they will be hoping to make the London Stadium a huge part of their new era under Slaven Bilic. Their former home The Boleyn Ground witnessed some of the club's best nights and had been the club’s home since 1904.

Football fans can enjoy unrestricted views for both home and away supporters. Football Ticket Pad can supply a host of West Ham VIP and hospitality seats giving fans access to all of the club’s biggest matches for the season.

West Ham fans are some of the most passionate supporters in England and customers can secure their seats safely and securely to watch the Hammers play and hear 60,000 fans sing their famous ‘I’m Forever Blowing Bubbles’ anthem.

Plans have recently been announced to expand the stadium to accommodate another 2500 football fans to reach the demand to watch the team in action.

Betway Stand: This is the equivalent of most clubs Main Stands. Here, fans can purchase their longside upper and longside lower tickets and are housed on the same side of the pitch as the West Ham players dugout.

Bobby Moore Stand: This is a popular spot for West Ham United season ticket holders and customers can expect a lively atmosphere when sitting amongst some of the most ardent Hammers support. Fans sitting in the Shortside Lower seats have a shallow seating area so it may be best to opt for seats further back in the lower tier or in the upper tier for a better view of the action.

The Bobby Moore Stand is located North of the stadium behind the goal and also provides a new landmark for Hammers fans to visit before the match. Champions Place features the Champions Statue of England’s World Cup triumph in 1966 which included West Ham United club legends: Bobby Moore, Geoff Hurst and Martin Peters.

The area will also include a walkway of dedications to West Ham legends and 20,000 engraved granite stones with fans’ names carved into them. Champions Place is also home to the Olympic Bell rung at the beginning of the 2012 Olympic Games.

East Stand: Tickets in the East Stand are located opposite the tunnel and dugout adjacent to the touchline giving totally unrestricted views of the playing action. The East Stand also includes the 1966 VIP hospitality tickets - 1,966 seats which pay homage to the club’s most famous players who helped guide the country to World Cup glory.

2016 marked 50 years since Bobby Moore, Sir Geoff Hurst and Martin Peters lifted the World Cup for England and this exclusive area offers some of the most prestigious seats in the stadium providing superb halfway line views and padded seats. Football Ticket Pad has a variety of West Ham tickets in the East Stand so check out fixture pages to see what we have available!

Football Ticket Pad has a range of Shortside Upper and Shortside Lower tickets for this section of the stadium when purchasing your West Ham United tickets. Away section tickets are also available for travelling supporters wishing to book an away trip to one of the most impressive stadiums in the Premier League. 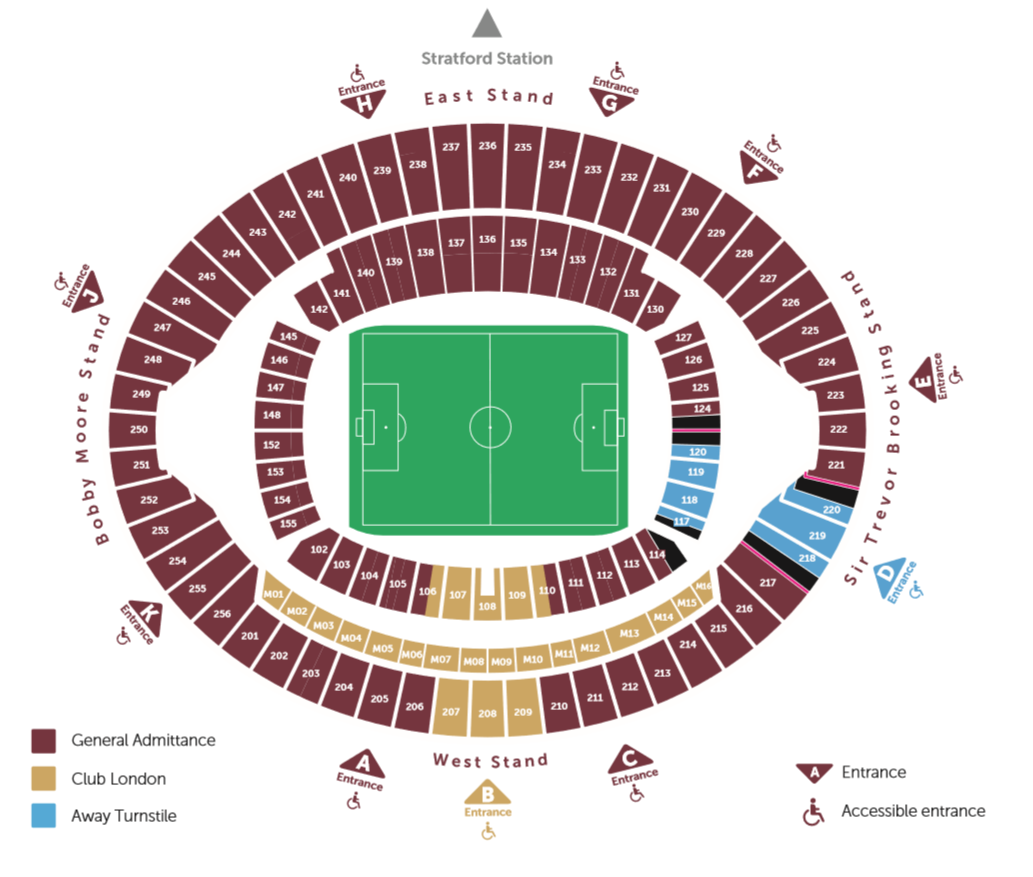 Season/members cards: These seats are reserved seats which belong to West Ham United season ticket holders which are made available to customers for home matches at London Stadium. Football Ticket Pad customers can purchase season/members cards for matches of their choice depending on ticket availability. Once purchased, customers will then receive their West Ham tickets in plenty of time before kick-off, before returning their season/members card in a pre-paid envelope.

E-tickets: West Ham United also carry an e-ticket option but this is only applicable for Football Ticket Pad customers purchasing West Ham hospitality tickets. E-tickets are confirmed in an email once the payment has been authorised. WHUFC ticket holders can then scan the email barcode on entry to London Stadium. There are plenty of hospitality options at The Olympic Stadium, with the most popular suites being the London Club in the Betway Stand.

Paper tickets: Once your ticket payment has been confirmed on Football Ticket Pad your tickets are then sent out by post to the address provided in your transaction details. Customers then receive their West Ham tickets 3-4 days prior to the match and will be notified by email once their tickets have been dispatched. West Ham ticket holders can then enter the stadium by scanning their paper ticket at the displayed turnstile on their ticket.